Satomi Satō (Japanese)
Aria Shichijō (七条 アリア Shichijō Aria) is a second-year student (later a third-year student) who serves as the Student Council as Secretary and Shino Amakusa's best friend. She is the most mature character in appearance, and comes from an affluent family. However, her mind tends to follow the same paths as Shino, seemingly more so, and seems especially interested in bondage.

She tends to be airheaded at times, the consequence of being absurdly rich and overly pampered. Because of this she often spaces out, and will be standing in front of doors waiting for them to open like automatic ones, or standing in front of stairs waiting for them to move like an escalator. Being more well-endowed than her fellow student council members exacerbates Shino's complex about her chest, and possibly bothers Suzu Hagimura.

Aria is a pale-skinned teenage girl who is acknowledged as being incredibly beautiful and attractive by virtually everyone with back-length light brown hair that has bangs hanging over the right side of her face with a single medium-length hair strand on the left side, light brown eyes and she is easily the most buxom character in the series.

She often has a calm and gentle look on her face that makes her seem motherly. Even Takatoshi Tsuda, who is generally immune to the charms of the various girls who surround him, is unable to resist her charms (i.e. he has been forced to hide occasional erections from close physical contact with her).

Despite being the daughter of the wealthy Zaibatsu Shichijō, Aria is far from a spoiled girl. In fact, she is extremely generous and more than happy to use her wealth for the sake of her friends. There are several occasions where she's brought the Student Council members to various places at her expense, and a few where she's brought along even more people (e.g. she once brought along the Judo Club, Ranko Hata and Kaede Igarashi along with the Student Council to a hotel opening).

One of Aria's most notable quirks is her airheadedness. This works in tandem with a "common sense" different from most people, most likely due to her upbringing, to create a surreal perception of the world and the goings-on around her. While she is level-headed on many occasions and is one of the most reliable people in the school given her position as the Student Council Secretary, she has also displayed misperceptions, presumptions, and made mistakes or have done things bordering on the nonsensical i.e. forgetting schools don't have escalators or sliding doors, not wearing underwear most of the time, wearing a chastity belt etc.

Of the Student Council members (barring Takatoshi Tsuda himself), Aria is the most mature. She has a warm and motherly feeling to her who is also calm to the point that Shino Amakusa and Suzu Hagimura often overreact.

That said, she is also the most perverted and twisted member of the Student Council, surpassing even Shino due to the fact Aria's sexual interests tend to be more extreme. She has expressed interest in things like enemas (for sexual purposes), exhibitionism and bondage (both as a submissive and as the dominant). This is arguably due in part to her parents and upbringing, as she has been privy to material and events that may have influenced her during childhood.

Shino and Aria have known each other longer compared to other members of the Student Council and appear to understand each other and get along very well. They serve as a direct counter to the duo of Takatoshi Tsuda and Suzu Hagimura, being the side that goes on pervert and ridiculous mental excursions and serving as bokke to the former tsukkomi in the manner of traditional Japanese comedy patterns. At the same time, Shino is jealous of Aria's figure while Aria occasionally seems to envy the easiness with which Shino gets tangled up with Takatoshi, though all of it is played for laughs. Other than Naruko Yokoshima, Aria is the only person whose perversions and jokes are extreme enough to make Shino herself act as the tsukkomi on occasion.

Suzu is agitated with Aria's chest.

Takatoshi initially found Aria the easiest member of the Student Council to get along with, since she wasn't as intimidating as either Shino Amakusa or Suzu Hagimura. However, after getting to know her better, he's since learned to be just as guarded around her as he is around Shino, Chihiro Uomi or Naruko Yokoshima. Despite this, he undeniably finds her attractive (as evidenced by Ranko Hata revealing he can't keep his eyes off her breasts, or how he becomes embarrassed when she gets too close to him).

Compared to Shino and Suzu (who both developed feelings for Takatoshi fairly early on in the series), Aria's interest in him was less "potential boyfriend" and more "potential plaything", but all that would be changed in Chapters 277-278, where Takatoshi chose her as his partner in a play the Student Council were part of. Despite having logical reasons for picking her (he felt choosing Shino would give people more gossip material and choosing Suzu, his classmate, might be awkward), he failed to notice Aria blush from the romantic speech he'd given. Since then, Aria splendidly fell in love with him, and has been somewhat more aggressive in pursuing him, such as taking advantage of him temporarily acting as her butler in chapter 297 to keep him close by, and once again in chapter 343 when she has Tsuda read a story while she sits on his legs.

In chapter 344 a purer side of her is shown by not being able to sleep due to the presence of Tsuda that made her heart beat because he was fanning her because of the summer heat. In chapter 542 Aria couldn't sleep well the last night because she had a new pillow, trying to sleep in the student council unsuccessfully, so Tsuda offers his arm like her pillow (like a joke) and she accepts (a joke too), falling asleep and admitting it felt good.

Dejima is Aria's maid and their relationship appears to be good, partially because they share similar interests and thought patterns. It's something of a running gag that Aria is one of the people who put Dejima into a perverted mood the easiest, and in one of the episodes it's shown Aria is aware of this and approves with a straight face. 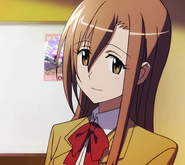 A young Aria with her parents
Community content is available under CC-BY-SA unless otherwise noted.
Advertisement