Extremely perverted and is attracted to younger men, including her male students.

Yū Kobayashi
Naruko Yokoshima (横島 ナルコ Yokoshima Naruko) is the most notable teacher in the series, easily making the most (of the few) appearances of any adult character. As a teacher, she is addressed as Yokoshima-Sensei (literally 'Teacher Yokoshima') by every other character.

Despite her role as a teacher and adviser of the Student Council, she is easily one of the most perverted characters in the series, probably even greater than either Shino Amakusa or Aria Shichijō.

Naruko has neck-length reddish brown hair, dark brown eyes, she is roughly equal to Takatoshi Tsuda's height or slightly taller in terms of height and she has a sizable bust she is proud of (though it is still apparently less buxom than Aria's).

As a teacher, she does not have to wear a uniform and is normally seen in the same outfit: a purple long-sleeved shirt with white sleeves and a white collar, tight greyish trousers, a loose hanging belt that is normally around her hips and a single blue bracelet on her left wrist.

While attractive, her perverted personality is a major turn-off for people like Tsuda (who would never let her get away with anything) and the Beach Playboy (who was scared off by how aggressive she was).

Naruko is an incredibly perverted woman who is even more so than Aria Shichijō and Shino Amakusa. She apparently has many lovers and aggressively seeks out younger guys, including her male students. She also happily talks about sex-related topics openly, including her various fetishes that include (among other things) bondage and outdoor sex. She is often portrayed as unreliable and useless as an educator, to the point she was allegedly put in charge of the Student Council because they were so competent they could easily make up for her incompetence.

However, she also has some hidden depths. She often complains about not being able to settle down (25 often being stated as the age a Japanese woman is no longer suitable for marriage) and occasionally shown to like children. In addition, she is a reasonably experienced teacher (at least when dealing with emergencies) and quickly took charge of a search when Suzu Hagimura accidentally got separated from her group during a trip to Osaka.

Despite Shino's own perverted outlook, Naruko is perhaps the only person who can force Shino to act in the role of Tsukkomi (as opposed to her usual role as a Boke). There are several occasions where she's eagerly joined in perverted conversations with Naruko, but there are also times where Naruko goes too far and Shino is forced to cut her down with a comment.

Yokoshima seems to recognize Tsuda's ability to perform tasks for the Student Council, and for the school as Vice-President. She has tried several times to make a move on him, but each time (once locking him in a room with her) he has managed to escape. He will also call her out on her perversions, much like he does with others. Once when Suzu got lost, she threatened to steal his virginity if they didn't find her.

Music teacher. She is apparently younger and less experienced as a teacher than Naruko, but also appears to be well aware of Naruko's personality. With the help of Daimon-sensei, she kept Naruko in line during the Second Year School Trip to Osaka.

She was still horrified to stumble onto the scene of Naruko attempting to carry out a sex act in school.

P.E. teacher and Michishita-sensei's fiancee. Naruko once took the credit for training Mutsumi Mitsuba and the Judo Club during a school assembly, leading Daimon-sensei to sigh that he was the one who trained them. Like Michishita-sensei, he was familiar with Naruko's personality and kept a close eye on her during the Second Year School Trip.

The new teacher at Ousai. Being both female, teachers and single, Naruko immediately paired with Rika. Often they can see together drinking and chatting after school or at Faculty reunions. Naruko extremely perverted nature has a deep contrast with Rika common sense creating a boke-tsukkomi duo and expanding the stories that include the Faculty at Ousai. It also liberated Takatoshi to constantly answer the craziness of Naruko. 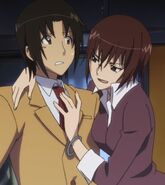 Naruko likes younger men, including her own students
Add a photo to this gallery
Retrieved from "https://seitokai.fandom.com/wiki/Naruko_Yokoshima?oldid=6162"
Community content is available under CC-BY-SA unless otherwise noted.